Colleen Lewis has been involved in parent participation schools for over 14 years. She began working as a parent, when her daughter started in the inaugural year of Moreland Discovery School. Both of her children attended Discovery Schools with her son starting in the inaugural year of Discovery Charter School.
With many years as parent volunteer under her belt, including two years as MDS Council president, Colleen began substitute teaching. Last year she held a long term substitute position in a sixth grade classroom here at Discovery. She is excited to be back at Discovery in a job sharing position with Cynthia Davis while she completes her credential work. Colleen holds a BA degree in Theatre from San Jose State University.
Colleen believes in the wonderous possibilities that can happen when teachers, parents and students work together to create a community. She has seen how much it can give to a child with her own two children, one now at UC Davis and the other a DCS graduate attending Prospect High School. Colleen hopes to bring her previous career as a costume designer and theatre teacher into the classroom and engage students with hands on activities and maybe a little drama. In her free time she likes to read, hike, camp, and backpack with her family. 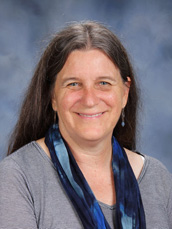